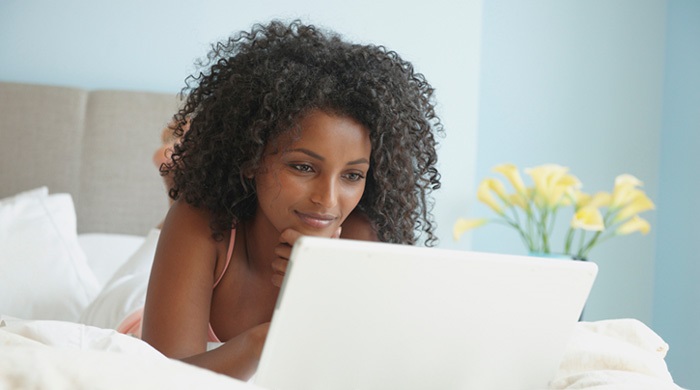 I can’t be the only one that hates it when I’m chatting with a guy and he says, ‘Send me a picture’

In 20**, I met one Sam (not real names) at a friend’s house party. We got along so I gave him my contact details without hesitation. First, he asked for my phone no, then my pin, my Facebook name, my yahoo messenger name and my Twitter handle. We chatted throughout the night after I returned from the party. The following day, he was to return to Abuja where he was based and this guy played the part of a tour guide by taking photos of different towns he passed and sending it to me. He said it was his first road trip in Nigeria and he wanted to share the experience with me. I was silly to think he was just being romantic. sigh

Later that evening, as I was having egusi and fufu in a battered looking stainless plate in my room, he sent me a BBM message asking what I was up to.

“Eating. We will chat when I’m done.” I typed.
“Can I see your food, please?” Was his response.

Sam was from a wealthy home so I felt the need to impress him.
It was bad enough I was eating fufu for dinner instead of spaghetti bolognese. I had to sneak into the kitchen to empty what was left of my food into my father’s plate, the only expensive looking plates at home. Then I opened my mum’s soup pot and topped my soup with four extra meats which was half of the meats in the pot. I also emptied my kid brother’s nutric C in a wine glass and arranged everything in the dining table before I could take a photo of ‘my dinner’ for him.

It didn’t stop at that. He was a narcissist. Every time we chatted, he always sent me selfies of himself at intervals. That was not really a problem except that he kept asking I return the favour.

And he knew how to flatter…

7am in the morning, when my face is looking like bad mood, he’s saying he wants to see ‘my angelic face’.
9pm at night, he wants to see how ‘his queen’ looks before going to bed. In the middle of a serious chat, a photo of his feet or beards would just pop in my phone. He was as crazy as that and sadly, he infected me too.

I used to wear my brother’s old t-shirt to bed before I met him but I had to invest in a sexy night gown after I met him. I changed bedspread frequently and I was always positioned at a corner of my room where the wall paint was not wearing off whenever I took selfies for him. Before I knew it, I started drawing my brows and glossing my lips to bed because sometimes, when that spirit enters his head, I can wake up at 2am to see a message asking to see a picture of me so he can sleep better. I always complied because I liked him. I mentioned this already, didn’t I?

Imagine my surprise when I woke up one morning to numerous pings from him. When I scrolled up, I saw ps had entered my phone with the caption ‘I thought of you all night and woke up like this‘. Apparently, he was pinging because he needed me to say something to the ps. I was torn between saying “It’s a fine one’ or “It’s a good one’ but I wasn’t sure that was the proper thing to say to a penis so I just typed ‘Thank you.’

His reply was ‘Don’t thank me. Send me yours.‘

Being the sarcastic person that I am, I wrote, ‘But I don’t have a dick na‘

Next thing, my phone rang. This guy called and was shouting on how I have been taking him for granted. Peace was restored when I laughed and said “I’m sorry please! It’s just that I haven’t done these things before. Will you manage breast?”
“Send!” He said in an angry tone and slammed the phone on me.
Imagine the dude forming arrogance on top my own breast. sigh

So yours truly went to google and googled.

God bless Google! I found one that looked like mine sha. It was low quality and very convincing so I cropped out a tattoo beneath the model’s left breast and sent to Sam.
And so it began…

‘You are so beautiful‘ was Sam’s response to the photo of my googled breasts.
Beautiful? A photo that had no face. I replied with the shy emotion icon.

As though his intentions were to compensate me, he said he was hard again and another photo of an erect manhood entered my phone. I am a fast learner so I typed, ‘It’s beautiful.’

Then I came up with the excuse that it was time for general morning devotion in my house and I had to run along. I knew a picture of “the other part of my body” was at stake if I stayed an extra second to chat with him.

From that day, I avoided late night chats and early morning chats with him. In the afternoons when we chatted, I always gave him the impression that I was hurdled with one house chore or the other. Sam was the persistent type. He still sent me photos of his p***s most mornings even though I rarely opened his chat until midday. Then I would type,

Three days after, a new p***s photo.
‘Its beautiful’

One week after and another p***s photo,
“It is beautiful”

Notice how I interchanged those two words? Like I mentioned earlier, I am not very good at holding a conversation with a penis.

Then one afternoon, in the middle of a random chat with Sam, he called me an extremely boring person. I knew what stemmed his anger and as annoying as he was, I did not want to upset him further so I went to the good old google to find a vagina for myself.

Later than evening, I struck a conversation with him.

When he typed ‘So what are you wearing dear?‘ I knew the time had come.
When he asked to see colour of my pant, I just respected myself and sent him my new ‘thing’.
Judging from his remarks on my breasts, I was expecting him to call me all the sweet names in the world but he surprised me by sending,

Apparently, there is nothing like a beautiful or angelic vagina. An old friend of mine was seriously disturbed because the first day her boyfriend saw her thing, he said, “It looks nice.”
Is ‘clean’ or ‘nice’ the only compliment a girl can get? I hope not.

Sorry for the digression.

Sam also asked for a photo of my breasts and luckily, I still had the former one so I applied sepia effects (no IG then) to the breasts and resent it.

He asked why I could not take a fresh photo and I said,

“But it is still the same breasts. Nothing has changed.”

“Take a new one jhoorrrr” I forgot to mention he was fond of using the slang “jhoooorrr” in a very annoying manner.

He argued that he usually sent me different photos of his penis. I said it doesn’t matter because the penis always repeats the same pose (i.e erect) in all the photos so it makes no difference too.

He LOLed and asked if I trust him. I replied in affirmation.

I expected him to edge off only for him to say all I needed to do to prove that is to capture my face in the photo.

That my eyes are sexy and he would go crazy if he sees my eyes and breasts in the same photo. Like he was not crazy already for demanding such? I was so mad at him. To hell with a discontented penis!I told him to use blackberry picstory app to stitch a photo of my eyes and breasts together cos there was no way I was going to play that sort of rough game with my future.

He called and began bashing me again. This time around I made no effort to pacify him. Literally, my phone was on speaker on my bed while I picked beans until he was tired of talking.

When I checked my BBM contact list after the call ended, he had deleted me. We reconciled on Facebook a few weeks later but by then, the lust had faded and I refuted him when he offered to re-add me on BBM.
Last time I heard of him, he’s was in Canada.

In case you are wondering the essence of this lewd post, I met a guy last week. Just when I was wondering how many more frogs will I kiss, he had the guts to chat me up three nights ago to say,

HIM: Lagos rain is crazy. I am so cold.

HIM: Lucky.Wish you were here to warm me .

HIM: Hmmmm.So tell me what you’re wearing?