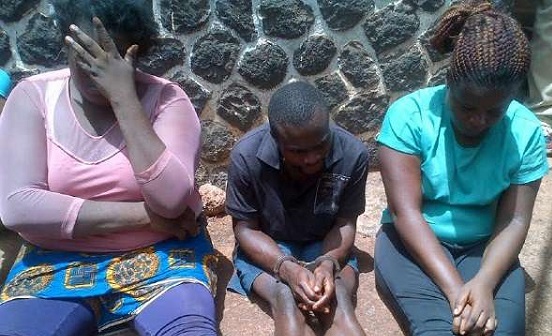 What a mess! Is there a reason valid enough to kidnap a woman who bore you?

To carry out this despicable deed, one of them contracted the services of her boyfriend – a certain Monday Egbe

They agreed to collect a ransom of N2.5 million naira  from their brother­ – a certain Mr. Eric Achime based in Lagos.

The contracted kidnapper would be paid N500,000 out of the bounty.

Thankfully their plan was foiled when Monday Egbe was arrested on this Monday.(no pun intended)

When rounded up by the police , the two girls claimed that they did it to get money for their mother’s eye problem.

According to them their brother simply refused to pay the ransom, “I brought my friend and he helped us in arranging the kidnap. He was the one calling our brother, but he refused to bring money; he said the kidnappers can eat her if they liked. We didn’t hurt her at all; it was all for our mum’s good, though we didn’t tell her.

Their mother – Mrs. Hannah Achime has described the experience as “terrible and dehumanizing.”
One of the girls is a graduate of the Enugu State University of Science and was set to go for National Youths Service Corps.