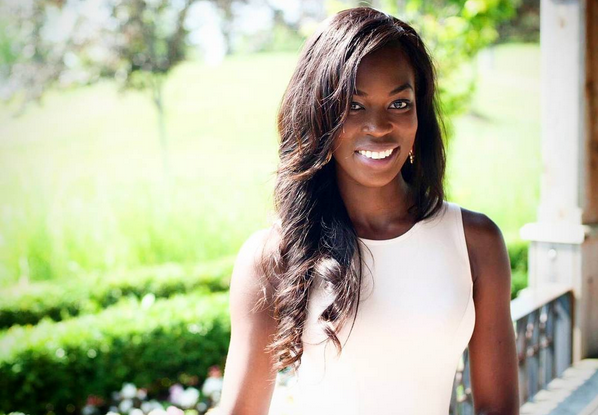 Tarila Okah is the daughter of  Charles Okah.  Her father was arrested in 2010 in connection with the 2010 bomb blast in Abuja. For the last 6 years, he has been held in the Kuje Prison without any conclusive decision being taken.

Recently Tarila Okah, who is based in Canada, came to Nigeria with her fiancé to meet her father in Kuje prison. As they prepare to get married in few weeks, she writes an open letter to the President

I hope this letter reaches you in good health. My name is Tarila Okah, daughter of Mr. Charles Okah, who is currently remanded at Kuje Prison and standing trial before Hon. Justice Gabriel Kolawole at the Federal High Court in Abuja over the 2010 Independence Day bomb incident.

Mr. President, I am writing this letter principally to draw your attention, the entire people of Nigeria, and members of the international community to what I perceive as injustice being wilfully and maliciously meted to my father by the Nigerian state. Within the last 10 months, disturbing media reports about his attempt to commit suicide at the Federal High Court in Abuja on October 6, 2015 and his failing health are sad reminders of the harsh reality of my father’s frustration with the judicial system in Nigeria, which is notorious for elastic trials that can drag on for years on end and wear out all parties. It is rather unfortunate that several court dates in the course of my father’s trial have been cancelled either because the presiding Trial Judge had a conference to attend or for other reasons that brings disrepute to the Nigerian justice system. For instance, the Prosecutor Dr. Alex Izinyon, a Senior Advocate of Nigeria failed to attend one of the trials on a date that had been agreed upon beforehand, instead choosing to attend his child’s graduation ceremony abroad.

With all due respect, Mr. President, no democratic Government anywhere in the world, including Canada where I currently reside, would treat a prisoner’s attempt at suicide as well as the prisoner’s failing health, with disdain. Such a peculiar prisoner’s case ought to be concluded speedily by the Judiciary. Alternatively, such a Prisoner of Conscience as my father, should be granted bail. However, from all indications, the Nigerian Government is clearly insensitive to his plight.

Your Excellency, I have consulted with several Nigerian lawyers who have sufficiently educated me that, pursuant to Section 162 of the new Criminal Justice Administration Law in the country, my father is entitled to bail; having spent more than 3 years in prison custody. Nevertheless, Hon. Justice Gabriel Kolawole has on two previous occasions overruled my father’s applications for bail. However, the pace of the trial has still not been picked up.  Meanwhile, Justice Kolawole in 2011 easily granted bail to Senator Ali Ndume who was standing trial for terrorism as an alleged sponsor of Boko Haram. Today, after being re-elected on the platform of your party, the All Progressives Congress (APC), Senator Ndume is the Majority Leader of Nigeria’s upper legislative chamber, the Senate, while my father (who is equally as important to society) is still languishing in prison as an inmate awaiting trial; almost 6 years after he was first arrested on October 16, 2010 on suspicion of being “JOMO GBOMO,” the spokesman for the Movement for the Emancipation of the Niger Delta (MEND). Interestingly, Nigerian media perception about my father’s culpability in the Independence Day bomb incident keeps changing. At first, he was accused of being the spokesperson of MEND. Later, he was described as an accomplice to the alleged crime; after the media and the Nigerian Government realised that ‘Jomo Gbomo’ was still releasing statements on behalf of MEND, even as my father was firmly held in custody! Now he is accused of being the mastermind.

Thus far, the prosecution has relied heavily on ‘witnesses’, all of whom have contradicted their statements under cross examination. In a recent court sitting, a witness from the Department of State Security (DSS) who introduced himself as a ‘Crime Scene Investigator’ admitted that, “no evidence was collected at the crime scene”. While another witness who supposedly ‘sold’ a Mazda car to the 2nd Defendant, admitted under cross-examination that, the very first time he set his eyes on the said Mazda car (Exhibit 2) was “at the premises of the DSS Abuja Headquarters.”

Without prejudice to his ongoing trial before Hon. Justice Gabriel Kolawole, I honestly believe that my father is innocent of the crimes alleged against him. Over the 6 year period of his incarceration and trial, his businesses which employed many Nigerians have collapsed; his family is in disarray. Years apart, especially under such circumstances, often dissolves the emotional bonds between a husband and his wife, and for my much younger siblings who have now spent more time without their father, there are virtually no emotional bonds to be dissolved.

On a more personal note, I will be getting married in a few weeks; albeit without the privilege of having my beloved father walk me down the aisle – the dream of every daughter. I feel an admixture of joy and pain as this day approaches knowing that my father is alive but held somewhere unjustly. Clearly, my siblings and I are being punished vicariously by the Nigerian state over crimes allegedly committed by our father which have not been proven beyond reasonable doubt by a court of competent jurisdiction. Unfortunately, in Nigeria, the mere act of filing even trumped-up charges carries along with it a strong presumption of guilt, which has led to my father’s conviction in the court of public opinion and has also led to the abuse of his fundamental human rights. I know that some Nigerians, on reading this open letter, will attack me for daring to appeal for my father’s freedom. But my message to those compatriots is simple: it is high time we focused on finding the real perpetrators.

Finally, Mr. President, in your determined quest to fight corruption in Nigeria, I believe that the concept of corruption should be expanded beyond financial crimes. We must also fight corruption in the system, and in this case, the judicial system. We have witnessed the speedy handling of cases involving high profile politicians, but a very sluggish process for others. The joy of my upcoming marriage plus the pain of a missing father (who is alive) equates to the simple plea: #PLEASEFREECHARLESOKAH!