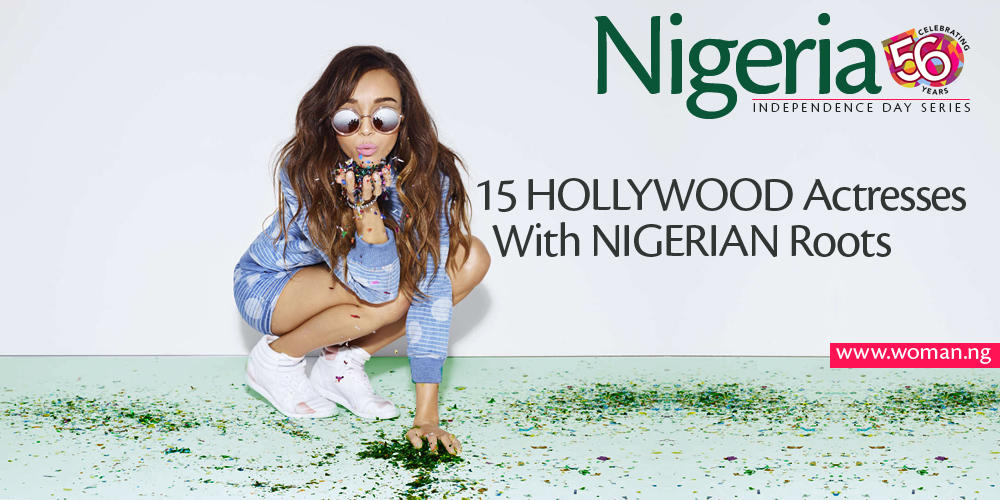 Hollywood is littered with talents who have Nigerian roots, with one or both parents or grandparents being Nigerian. Here are 15 gorgeous women have played lead or supporting roles in recognized movies and TV shows.

If we missed out anyone, sound off in the comments box!

Carmen Ejogo is British actress and singer. Her father is Nigerian and her mother is Scottish, but she was born and raised in London. Her film credits include – What’s the Worst That Could Happen?, Away We Go, Sparkle, Alex Cross, The Purge: Anarchy, Boycott and Selma.

Caroline was born in England to Nigerian parents and attended boarding school in Nigeria for a while. She later enrolled at Brunel University in the UK to study Medicinal Chemistry, but left after it was decided she was not suited for the course. She won a scholarship to attend the Academy of Live and Recorded Arts. She has featured in movies including Eragon, Aeon Flux, Paris Connections and TV series, Supernatural, Torchwood, etc.

Sophie is the daughter of a Nigerian father and an Ashkenazi Jewish mother. She was brought up in her mother’s Jewish faith and was raised by her mother after her father left them. She has featured in many movies including Hotel Rwanda, The Secret Life of Bees, After Earth, Aeon Flux, Mrs Mandela and TV shows including the BBC’s The Escape Artist, The Slap, Oliver Twist, Criminal Justice, Scream of the Shalka, Father & Son, etc.

Ashley was born in London to a Nigerian father. She attended the famous Royal Academy of Dramatic Art in London. In addition to her acting career Ashley runs a successful fashion blog – Ring My Bell. Ashley has featured in many movies including Cassandra’s Dream, Storm Damage, How to Lose Friends & Alienate People, Venus and TV shows including the ITV’s Secret Diary of a Call Girl, Revenge, The Beautiful Life, Salem etc.

Osas was born by Edo parents in the Bronx, New York. She received her first degree in Broadcast Journalism from Pennsylvania State University and also a Fine Arts Masters Degree from Actors Studio Drama School at Pace University.  She won the Miss Black USA Pageant competition in 2010 and has featured in many Hollywood movies including Cadillac Records, Under The Table, Restless City, The Tested, etc.

Uzo was born in Boston, Massachusetts to Nigerian parents. She studied classical voice at Boston University. She is most known for her role as Suzzane ‘Crazy Eyes’ Warren on the TV show Orange is the New Black. She has also featured in movies like Pearly Gates, How to Live Like a Lady and others.

Hope Oliade Wilson grew up in England and Nigeria. She is a producer and actress and has starred in movies including I Can Do Bad All By Myself, After the Dark, Faith and Dreams, etc and recently TV show, The Last Ship.

Born in Brooklyn, New York as one of seven children to Nigerian parents. She has featured in movies including 12 years a slave, Steel Magnolias, Pariah, etc

Megalyn was born in Spokane, Washington to a Nigerian father and a Caucasian mum. She has starred in various many TV shows including The 4400, CSI Miami, House of Lies, Great Lengths, etc.

Judi is a British actress born to a Nigerian father. A model and TV presenter, she has appeared in many movies and TV shows including  The Twilight Saga: Breaking Dawn, Eastenders, Garfield 2, Heroes Re-born, etc.

Annie was born in Texas to a Nigerian father and an American mother. She has featured in movies and TV shows including, He’s Just Not That into You, Percy Jackson & The Olympians, the Lightening Thief, Entourage, How I met your mother, Arrow, etc.

Wunmi is a Nigerian born British actress. She was born in Zaria, Nigeria and moved to England. She has appeared in Law & Order UK, Philomena, Citadel etc.

Enuka is a Canadian actress of Nigerian descent. She is credited as a writer, actor and executive producer. She currently stars in the Canadian drama, Rookie Blue and and has appeared in 24 and Grey’s Anatomy.

Mercy Ojelade graduated from the Central School of Speech and Drama in London. She is mostly known for her supporting roles in Ezra and Incendiary.

Rakie was born in Wales to a Sierra Leonean mother and a Nigerian father. She has starred in movies and TV shows like Doctor Who, Dredd, Sahara and Silent Witness.