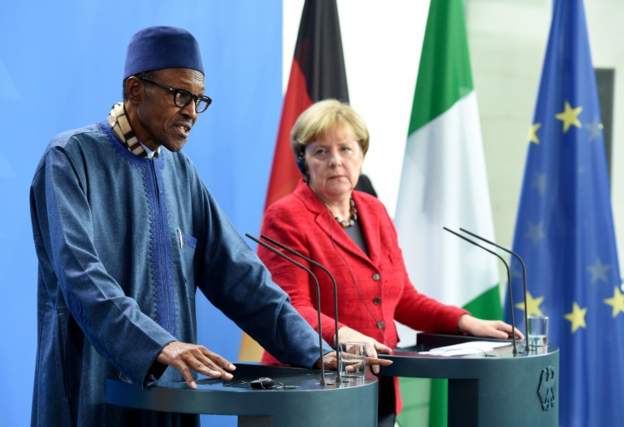 Many Nigerian women can relate to that backward thinking that says women belong anywhere else but where their opinions matter. We have experienced it at our workplaces. It has been said to us at our places of worship. We have seen it happen to us in our marriages. And anywhere else men can’t face the issue(s) at hand.

Earlier today, there were reported that in an interview with BBC, the wife of the President, Mrs. Aisha Buhari said that if things continue the way they are in the country, she would not support her husband in the 2019 elections.

President Buhari who is on a state visit to Germany reacted to the BBC interview during a joint press briefing with Germany’s Chancellor – Angela Merkel. According to Associated Press news agency, President Buhari laughed it off and said:

“I don’t know which party my wife belongs to, but she belongs to my kitchen and my living room and the other room.”

“So I claim superior knowledge over her and the rest of the opposition, because in the end I have succeeded. It’s not easy to satisfy the whole Nigerian opposition parties or to participate in the government.”

Here is a short clip of President Buhari responding…

I do not know what is going on with the Buhari’s, but the President’s response is one many Nigerian women have had to deal with when men seek to put them down.

It straight from the Patriarchy play book that says the easiest way to deal or disagree with a women is to put her beneath you. IT IS NOT OK! IT IS WRONG.