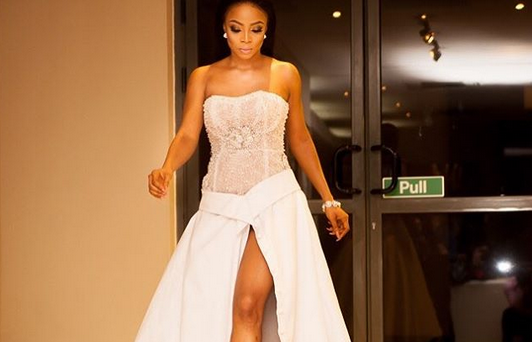 Not until November 4th, Toke Makinwa’s birthday, did we know that she was working on a project that had to do with her life.

The on-air-personality shared a video teaser of her now-completed project, ‘On Becoming,’ which talks about her childhood to her adulthood, her marriage, life after her marriage crashed, the shame she suffered, what people said about her and how she rose from it all to become who she is today.

Below are excerpts from her book:

“It was my wedding day. I was happy, yet I was waiting for something to happen. Maje had disappointed me three times before. We would pick a date to go to the wedding registry and he would call it off. It wasn’t until we shared our first dance that I finally believed that it had happened. .

“At some point while we were dating, Maje had asked if he could tape us having sex. This was a new one for me but I would do anything to keep my man, or so I thought, and so I obliged. But I was nervous afterwards because I didn’t want the tape to get into the wrong hands.

I dragged the file back to his desktop, and I could tell from the stilled image in the video that the person in it was not me. I clicked play and watched horrified as Maje had sex with Anita. Watching that video, all of the inadequacies I thought I had dealt with over the years came rushing back.

I had been with Maje from when I was an immature teenager, through my twenties, and for most of those years, Anita had been the standard I had to live up to. I had lightened my skin at some point – Anita was half Lebanese and half Ibibio, and Maje made me feel like he preferred her lighter skin.”

“There was a 70-day fasting and prayer programme at my church. I joined in: I was praying for Maje and I. On the final day, I asked God to reveal why Maje and I couldn’t find peace with each other. I opened my email address and typed Maje’s email address in. I went through email after email until I found pictures of a boy that looked exactly like Maje….”

“Who was that girl?” I asked “That’s that girl” “Which girl?” “The girl I told you about. Her friends are always calling me to say she really likes me and has a crush on me. Her name is Anita.” “So that’s the Anita girl they say you are dating.” “I’m not dating her. How can I date someone that is always saying ‘can I come and see you? I’ll bring my friend that you think is cute’?” “I accepted Maje’s explanation and concluded that Anita was not important . So I’ll be with Maje and she’d call and I’d tell him, “The girl that has a crush on you is calling.” And it would be nothing.”

“He had given me an STI in the past. He’d returned from a trip once and we had sex, and a few days later, I was itching. ‘I went to the doctors and they prescribed medication, but when I asked Maje about the infection he denied knowing anything about it. I went through his PHONE and saw a conversation with Anita where she complained that she had been itching.

I was even toying with the idea of becoming a mother. I would tell Maje at night to go for it. I didn’t want the happy days to end and I thought maybe, just maybe, a baby would bring us so much closer. But I knew Maje wasn’t ready for it. He wanted to open his facility, and I didn’t want the added stress of bills to come between us. I took care of myself well enough not to be a burden on him. I didn’t want him to shrink under the load of a new baby when his career was all he was excited about, and so when we did have sex, he would not cum inside me.

In 2010, maje’s mother took ill. By this time, I had been introduced to his family, and I spent christmas that year with them. I remember his mum praying for me, saying that God would give me my own husband, and I found this odd as I was dating her son.

Toke makinwa seem not to be fazed by the latter as she still wears her smile, with head raised high while enjoying her new status as a best-selling author.

In another interview with Claire Sulmers of Fashion Bomb Daily interviews, Toke makinwa fully opens up about EVERYTHING.

She shares her fears, her worries and growth; and her new man! She talks about how God has been faithful. Watch below.