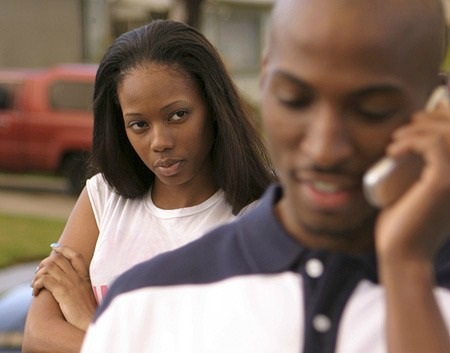 Coping with a partner’s infidelity is one of life’s most stressful and devastating experiences. If not handled well, it can bring with it feelings of rejection, betrayal, anger and sadness that can damage a woman’s self esteem.

SEE ALSO: Fadekemi The Serial Side Chick Can Only Blame Herself

An aggrieved lady, Uche shared on her Instagram the story of her boyfriend who she dated for four years but was cheating on her with another lady.

According to her, he had been cheating from the beginning as the other lady claimed they had dated for three years.

“Life can be so many twisted!!i read @tokemakinwa on becoming and thought for once it will never happen to me but here i am on the 31/12/2016 i found out that my bf of 4yrs just got engaged!!!Yes engaged!!!!we still saw each other on Tuesday..

it all happened like this I came to the house and due to harmattan the house was in a mess so i had to do some cleaning… Lo and behold i saw a new female shoe so i asked him who it belongs to and he angrily said my sister, i was pissed with the way he replied me so i took off. He didn’t know i had left but when he did he started calling texting and pinging and I didn’t reply any so he blocked me on whatsapp n continued texting saying if i dont come bk tonite i should forget the r/ship.

This was around 10:30pm so i told him no dt even if we wanna make things work out its going to 50 50 he comes out and i too come out n he said never. He then sent a msg saying in such its over you can date chris brown or drake bcos it wasnt his business. after a day i felt bad and wanted to chat him up i said to myself.

This lady v suspected he is having an affair with lemme chat her via fb to know if he bought her any shoe…so i did and she said he didn’t buy her any shoe but he is her hubby to be!! Will send in screenshot to cut the long story short!! @tokemakinwa@officiallindaikeji @lauraikeji#truelife#betraya

While we spoke she said she doesn’t understand that she was with him for 3yrs..so both of them found the house and both of us cleaned the house. I went to the market to get the 3d wall n wall paper and even as at last week he still told me to pls get some for him..he told her i was a frnd..

he told me she was a frnd! so she called him n he told her that he has never touched me, that nothing ever happened, that am just jealous that he is getting married so i told him i will threaten his life (really when m also in shock finding out today) he told her to block me and ignore meeee!!

And i told her that i never knew they were serious because when i saw their pic on fb he denied it and took it down. i told her to check if its there and she said no…she asked him n he said it was when they had issues that he was angry and took it down!!! So she called again n was crying that i should advise her like For real..

i told her i dont want again so she shld v him..and she said how will you feel if you ere this about the person u want to marry. meaning he was cheating from the beginning to the end..we got engaged and he waa still cheating.I wont say men are wicked but this one is a Devil!!!he would have played me till marriage.

My frnds have been my pillar,they are more upset than me…they have told me that either i was d engaged or side chic. we will never settle because you won’t settle with someone who is till lying after being engaged so i should forget it! Since yesterday i went out with 3 different frnds both male and female..have also gotten some for today..even my friend that isn’t around told her sister and she told me to come lets hang out..