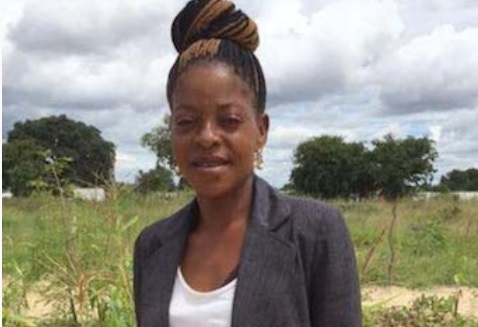 The Namibian police has awarded a 29-year old woman, Elizabeth Shintangu, who saved her husband, Matheus Kativa, from the jaws of a crocodile.

Kativa was having his bath in the Kavango river last year when a crocodile attacked him.

SEE ALSO: This Brave Girl Took Her Parents To Court For Trying To Force Her To Marry Her Cousin

Narrating the incidence to The Namibian, Elizabeth said,

“I still cannot believe that I was so brave as to fight a big crocodile to save my husband’s life. I got up very early to work in our mahangu field. At around noon, I went back home, and my husband wanted to go and take a bath in the river.

For some reason, I discouraged him from going to the river, but he insisted since he wanted to take a bath. I guess this is what people call fate. Since he was so adamant, I decided to accompany him. I took along our laundry so that I could do some washing while he was taking his bath.”

However, instead of Kativa taking his bath when they got to the river, he slept by the river while she washed the clothes.

When Elizabeth finished, she woke her husband, who said he did not want to bath anymore, but suddenly changed his mind, and went into the river to bath.

Suddenly, she heard her husband cry out loudly and the next thing she did was fighting off a crocodile, who at first let her husband go but not after biting off his lower arm.

While they were trying to swim to the riverbank, the crocodile came back and grabbed him again but Elizabeth did not give up on her husband even while he was already waving goodbye.

“The water was all red with blood. I then saw his face as he waved goodbye. I swam fast after them, and held his left hand and started pulling him back. Part of his right hand was still in the reptile’s mouth.

“When another piece of that arm tore off, the crocodile let go of him. But it came back again, and this time I decided I was not going to let go. I continued screaming as loud as I could, and decided that it was better for the crocodile to take his arm and not his or my life.”

Her screams saved them as people from the nearby village came to assist, and they were safely pulled out of the river.