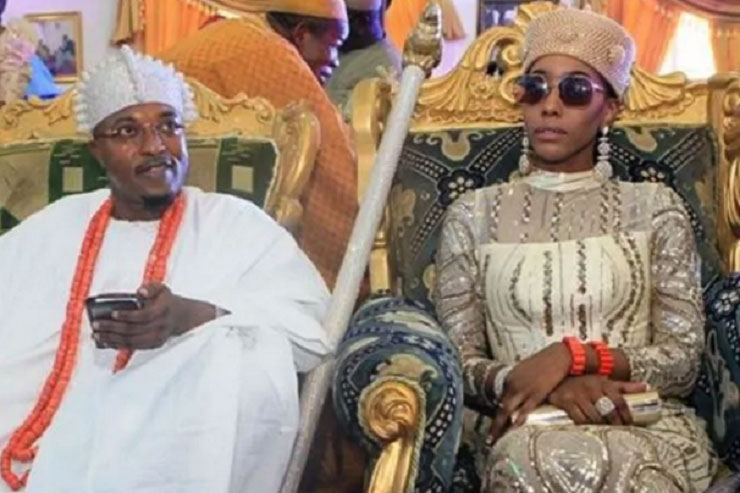 Queen Chanel Chin, is the wife of Oluwo of Iwoland, Oba Abdulrasheed Akanbi. Born in Toronto, Canada, Queen Chanel’s dream of coming to Africa was fulfilled when she got married to the Oluwo and settled in Nigeria.

However, one distinct thing about her is that she wears a crown and this has formed so many discussions especially when many queens in Yorubaland don’t wear one.

So, in a chat with Femi Makinde of Punch, Queen Chanel tells why she wears a crown.

I feel great wearing a crown because it brings awareness to our history. Our great progenitor, Oduduwa, and his wife, Olokun wore their crowns.  So, it is not a strange thing that I wear a crown. Oduduwa crowned his queen. Oduduwa’s wife sculpture in Ife is there and there is a crown on her head.

Oduduwa came from the East and all of their queens there wore crowns in the old time. Cleopatra wore crown and Oduduwa’s wife, Olokun, was the first to wear a crown. So, I feel very honoured to bring that back. There is nothing new or strange about it but it is just a way of bringing back our history.

The picture of this archaeological evidence was presented to Kabiyesi by Prof. Ogunfowokan and it is in our palace. I will give you the photograph to confirm this. Oluwo is doing this to underscore the important position of women and I think he should be supported.

This will give opportunity to women, that women should be given their due recognition. If our progenitor could crown his queen, why are we stopping queens from wearing crown now?