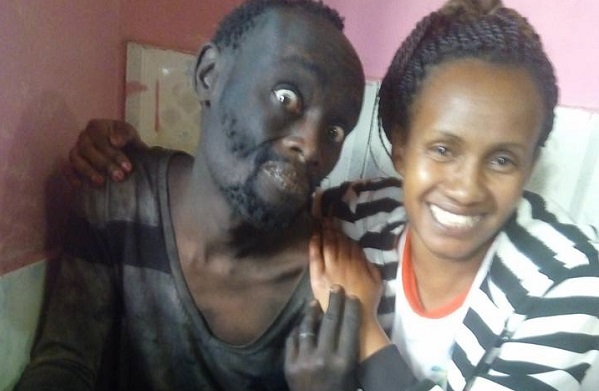 Recently, the picture of a woman and her friend, who is being helped to recover from drug addiction went viral on the internet and the woman was applauded, however, nobody knows the story behind this act.

In October, Wanja Mwaura was on her way to the market when Patrick called her name. Surprised to see a dirty looking man with bulging eyes, Wanja did not recognise him until he introduced himself.

Wanja and Patrick had been friends since she was seven years old as they attended the same primary school in 1992 and he used to be a great football player, with a nickname ‘Pele’.

He was separated from his parents as a child, so he lived with his grandmother in a squat but they were evicted from there. Even though Patrick often missed classes for inability to pay school fees, he still did well in his exams.

Sadly, when his grandmother died, he dropped out of school and that was when he started taking drugs.

When they met again, and got talking, Patrick told Wanja that he was ready to do away with drugs if he found help.

With that, she posted about Patrick’s plight on her social media platform, seeking for funds for drug rehabilitation.

“Rehab here is very expensive and I had no ways of raising funds on my own. We set up a crowdfunding page, but we only managed to raise around 41,000 Kenyan shillings (£300) initially. However the cost of nine days rehabilitation at Chiromo Lane Medical Center in Nairobi was more than 100,000 KES. I wasn’t sure how we would be able to cover this,” Wanja told BBC.

Nevertheless, Wanja took Patrick to the centre and a spokesperson for the rehab programme said Patrick was fully committed to the nine-day detox.

Within days, Patrick’s condition was better as he had gained weight and his concentration improved.

So, Wanja on her Facebook page shared Patrick’s progress and someone shared the story on his twitter page, making it go viral.

The post also attracted the attention of Kenyan media, who began to cover the story and Chiromo Lane Medical Center agreed to waive the entire fee for Patrick’s treatment.

Now, Wanja wants her friend to undergo a more sustained recovery, and is now raising funds for him to follow a 90-day programme at The Retreat Rehabilitation Centre, where he is currently staying.