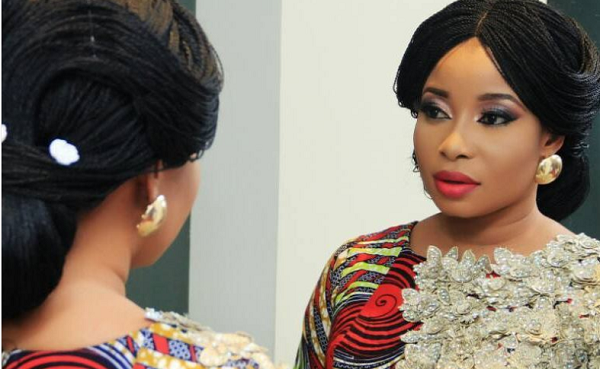 Yes, she is a Nollywood actress but she is not telling a film story. In a nine part Instagram post, Lizzy Anjorin shared the story of her life, detailing how she rose from nothing to become who she is today through hardwork.

Her reason for sharing is to give hope to people who may be struggling, not to give up.

“I have lived the life of a neglected child and a street child,” she said, revealing that she was born with a silver spoon but life happened to her family and she started living on the street with her mum.

They both worked 20hrs, slept for 2hrs and arranged their goods for 2hrs, “it was tough and lonely.. it got to a point that i asked my mum the whereabouts of my dad and she told me; u can only meet ur dad and his family when u make it in life..”

Hawking before going to school in the morning was not fun but she had to do it to survive.

“For a very long time we don’t eat meat except raining season when we picked tiny  snails to eat, we picked carton on refuse-disposal to sleep and whenever it rained we both remained standing..”

Once, her mother took her to two different families so that they could help their situation but “the one at Dopemu turned us down and said I’m not fit to be their house maid.” The other accepted her but she was maltreated and framed with stolen money.

The challenges were so much and didn’t seem to be ending that, “I attempted to commit suicide like 3times,” Lizzy confessed.

Even the money for medical attention was difficult to get when she fell while hawking and broke her cheekbones. She had to withdraw from school because her face scared the other children.

When she suggested to her mother that they should beg, she refused, telling her that a beggar and a thief were the same.

“U said, if we beg and i become a successful person that the stigma will be there for life.. U said,Okomi, let people know us as a hustler not a beggar or a thief…”

At a point, she became a child servant at a food canteen and that was where she met her baby’s father, who got her pregnant but his elder brother, who was a commissioner was against their relationship.

“What did he see in this poor servant of a poor restaurant, u guys are stinking leave my house or i loose the dogs,” lizzy recalled what her brother in-law told her when she went to her baby father’s house to notify them of her pregnancy.

Thankfully, her mother in-law came to her rescue and took Lizzy with her to her base in Jos, where she sold things for her.

“I got to Jos with one cloth and Ghana-must-go bag filled with nylon.. she told me to change my cloth but i was shivering, so she opened the bag and saw plenty nylon, then she said; did u mistakenly pick someone’s refuse and I told her dat, that was the nylon i do slept on, then she opened her wardrobe and gave me 10 new wrappers.”

Sadly, few months after she delivered her girl-child, her baby daddy died, yet, his elder brother did not check on her to congratulate or sympathise with her.

‎“My suffering doubled again cos I had a baby girl, they made me realize that female child holds no value in their family and male child is the real child.. I endured and cried often..”

Despite all she was going through, the thought of her mother made her resolve that she was going to make it in life. So, when her child was barely two years, she left her with her mother in-law and returned to Lagos to hustle.

“So i became church rat, i slept in churches, do odd jobs in day time.. May God bless the churches i slept in then but i can’t forget how many times i was beaten with bunch of broom bcos I was framed as emere (wizard) cos i was fair in complexion with slight red hair… It was so tough in my toilet cleaning job.”

She soon got a job as a receptionist and started schooling at federal Poly Ilaro. It was so bad that on her matriculation day, while her mates were enjoying the day, she was selling textbooks to get money for her school fees.

Unfortunately, she had to leave the school when she was labeled a ghost because she was the only one that survived an accident that killed others. Moreover, no one saw any family member come to visit her.

SEE ALSO: From Being Depressed As A Result Of Rape To Addressing Her Graduating Class As The Commencement Speaker, Stephanie Shares Her “Tears And Triumph” Story

“my 1st landlord gave me a quit notice bcos she noticed when everybody go for holidays, I always remained at home though it’s bcos I’ve no place to go..”

She rewrote JAMB and gained admission into Adekunle Ajasin University to study Law but she didn’t know until a year later.

She eventually got an admission to the University of Ogun State where she was offered a course in Transport Planing and Management. There, she met a customs officer who helped her start a business. By his help also, she always sold out on her products.

Even though her present is better than her past, Lizzy says she would not stop hustling because, “I fear poverty than death…”

Although her mother is dead, Lizzy says she is the bravest woman she knows. Her mother in-law who was also helpful died last year.

On why she doesn’t show off her daughter on social media, Lizzy said “I want her to show the whole world what she got in her brain by not slaying with her Mama’s fame.”

She is not through with her story. She hopes to share more in the nearest future.