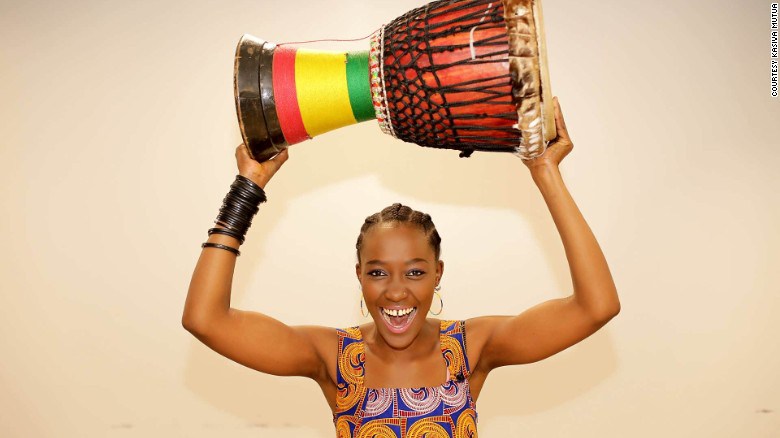 In Kenya, it is a taboo for women to drum but Kasiva Mutua defied culture and traditions to become one of the best drummers in the country with her rhythms in demand at music festivals and in recording studios around the world.

A well known percussionist, Kasiva learnt drumming from her grandmother.  She took her skills to local contests and won, however, the journey to getting recognition was a long, hard one but for her determination.

SEE ALSO: “We Blame The Woman For Everything. Her Marriage Didn’t Work Equals She’s In No Position To Talk About Marriage” – Toke Makinwa Speaks On The Culture Of Shaming Victims

When Kasiva started drumming, she got some long stares from people who wanted her to stop.

“There’s been a ton of problems I’ve faced as a female percussionist..” she said, sharing the challenges she’s had to go through.

“Drumming has been a subject of taboo to women in Africa and me rising as a percussionist and going publicly with it and making a living out of it is problematic to some people. I’ve had my drums torn in rehearsal spaces. I’ve been publicly called out and asked why I would put a drum between my legs.

I was once questioned how I could do that and, after having that conversation, this man made me feel like I was dirty to put something between my legs. I was seen as a sexual object at that moment, and that is not cool.”

But the 29 years old is unbothered because drumming makes her happy.

Now, Kasiva is not only accepted as a female drummer, she was chosen among other artists to represent her country at the annual Smithsonian Folklife Festival in Washington in 2014.

She is a major partner of a project uniting communities along Africa’s longest river. Kasiva is also encouraging other young women into music, with the aim of inspiring all-female bands.

SEE ALSO: “There Is A Strong View In Nigeria, As In Many Other Cultures, That A Marriage Is Not Complete Without Children. I Don’t Agree” – Ayobami Adebayo

Although, she is admired by many, some are still confused by her rise, she is not bothered. She only wants her audiences to look beyond her identity and focus on her musical skills.