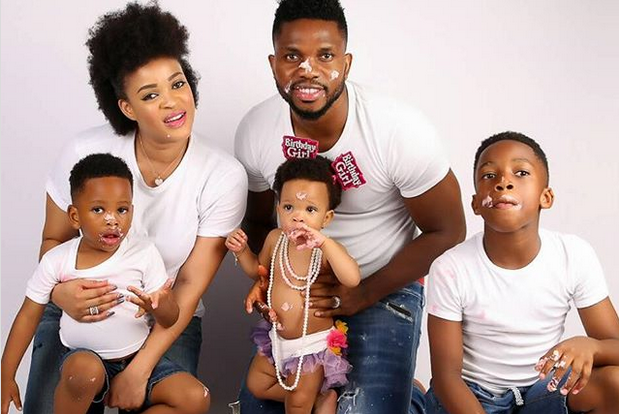 She thought she had flushed out her pregnancy after two doctors told her it was fibroid. A week later, she was scheduled to have a surgery to remove the remaining tissues as she still felt some pain but she was directed to another hospital.

Surprisingly, she was told that the ‘fibroid’ was a pregnancy and it was still intact. Months later, she had her baby girl. Adaeze Yobo, wife of Nigerian footballer, Joseph Yobo, shares the powerful testimony behind the birth of her daughter as she clocks one today.

#lookatmenow
Ist scan showed it was Fibroid, 2nd scan (diff. hospital) showed it was Fibroid and pregnancy but an incomplete abortion (whatever that means) but that I had to flush yu out, which I (thought) i did. A week later, i still felt sick so I called the Dr. and I was scheduled to surgically complete removal of the remaining tissue.

SEE ALSO: Adaeze Yobo Shares The Different Breastfeeding Experiences She Had With Her Three Children

On my way going, the holy spirit directed me to go to another hospital which I did and was told you were still inside and I had no Fibroid. instead of being happy, i cried and worried whether to keep you or not, worried if you will be normal after all the drugs n all. look at you now baby girl #lexineisonetoday #birthdaygirl

I remember calling and pulling all types of stunts for them to move the date for my C-sec from 13th to 14th so you can be a Valentine baby but to no avail.
You’re a star Lexine and you’ll always be my Val