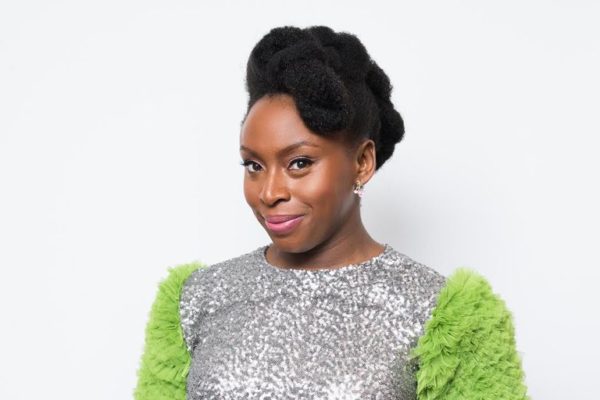 In an article titled, Chimamanda Ngozi Adichie Comes To Terms With Global Fame, The NewYorker speaks with Chimamanda about her life.

From childhood, being an upcoming writer to attaining greater heights in her career, life as a mum and wife, going through depression and raising her child, Chimamanda bared it all.

As a child, she had a kind of natural authority. Many girls wanted to be her friend, and in an effort to win her, they would present her with their lunches, and she would eat them. At the same time, she had episodes of depression, the beginnings of a disease that continues to afflict her even though she did not yet have a name for them.

SEE ALSO: The True Story Behind This Photo Of Two Childhood Friends

“I was a popular child who had tons of friends and did well in school but then I would have moments where I didn’t want to see anybody, didn’t want to talk to anybody, cried for no reason, felt that I was bad and terrible, isolated myself.”

On A Feminist Marriage

Before they had a baby, Chimamanda spent about half the year in Nigeria and her husband would join her when he could. But her husband doesn’t want to be apart from the baby for too long, so now she lives most of the time in the U.S.

SEE ALSO: You Think Someone’s Marriage Is Perfect Because Of A Nice Picture On Instagram? Read What Sonia Ogbonna Wrote And Think Again!

“One of the perils of a feminist marriage is that the man actually wants to be there. He is so present and he does every damn thing! And the child adores him.

I swear to God, sometimes I look at her and say, I carried you for nine months, my breasts went down because of you, my belly is slack because of you, and now Papa comes home and you run off and ignore me. Really?”

In Nigeria, when a woman in her family had a baby, all of her female relatives came to help and she laid in bed like a dying queen. She loved the idea of that in some ways, but when she had her baby in Maryland, she instructed her mother not to come for a month.

She realized afterwards that she had internalized what she took to be an American notion, that having help with a newborn was something to be slightly ashamed of. You were supposed to do everything on your own else you weren’t properly bonding or suffering enough, or something like that.

Right from the beginning, she found that she was consumed by anxiety. She seemed to have become a slightly different person, neurotic and on edge. She didn’t much like this version of herself, but she couldn’t help it.

SEE ALSO: Jodie’s Emotional Story About Her Near Death Childbirth Experience And Raising A Son With Special Needs

When she was younger, she wasn’t sure she wanted a child at all. She felt that since writing was the point of her existence, if she couldn’t write she might as well die and she worried that she couldn’t both write and be a good mother.

Once the baby came, finding the mental space to work became even more complicated. Working for her meant becoming wholly consumed by people who didn’t exist, which felt harder and more perverse when confronted by a baby who did.

She and her husband split the childcare fifty-fifty. After the birth, he took six months off work and then he started working again, but only three days a week. She was supposed to work on the days he stayed home, but often she found that she was so run down after her time on duty that she just fell asleep. Those days were exhausting.

Aside from not being able to write, the thing that had most worried her about having a baby was the immediate emotional aftermath. Her doctor had told her that she was likely to suffer from postpartum depression, so she went online to find out how other women had coped. Most of them seemed to advocate doing a lot of yoga, which was not at all what she wanted to hear. But in the end, after her child was born, she was fine.

She dreaded falling into that pit again. She knew that some people thought there was a link between depression and art, that it gave you insight or depth or something, but the idea that someone could write while depressed made no sense to her.

“I can’t even read. It’s a horrible, horrible thing. I can’t see my life, I’m blind. I feel myself sinking. That’s the word I use with my family and friends. Well, actually, I don’t talk about it with my family much, as lovely as they are, because they don’t really understand depression. They expect a reason, but I don’t have a reason.”

Nobody else in her family got depressed, and they thought she should keep it quiet.  She should certainly not talk about it in public, as she felt she ought to do. “There’s such a stigma attached to illness in general in this culture. Nigerians will have cancer and they will hide it and lie about it.”

When she is in a depressive state, she sits for hours and watches films about the Holocaust. Her family tries to discourage her from doing this which  seems to them unlikely to be helpful, but she does it anyway.

“They somehow connect me to something about human beings. I don’t know. I just know that I have a connection to the story of the holocaust. I find that I’m drawn to stories in which life is normal and then it’s not, overnight.”

“I think I’m addicted to a certain kind of nostalgia. I watch these films and I find myself in a state of mourning for all the things that could have been. They just make me cry and cry. I don’t know. All I know is that I will continue to watch them. I go on Netflix all the time to check, to see.”