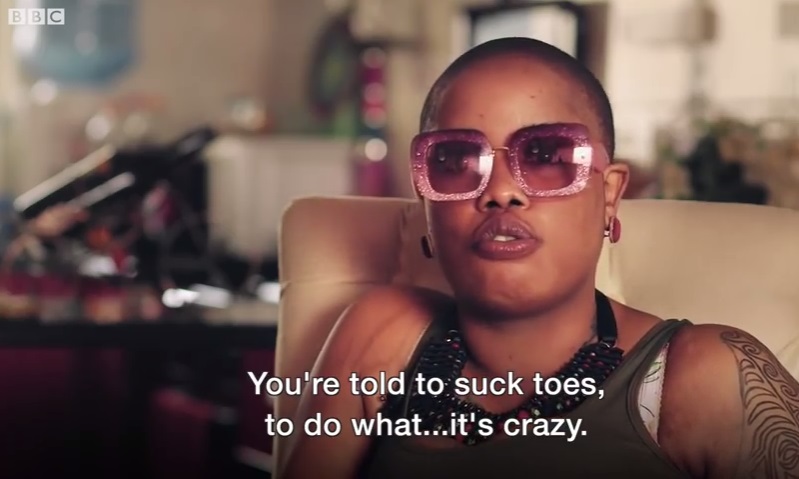 A socialite is an influential person with a wide reputation, but Bridget Achieng says being a socialite in Kenya means “a woman who goes half naked to attract rich boys in town and to get whatever she wants.”

In a video by BBC Africa, three women share their lives as socialites.

Born in the slum, Bridget  had always dreamt of living the good life but found herself working as a house help and a sales girl.

One day, a friend called her attention to her body, telling her she could be a model or a socialite and that was how it begun. Bridget started with photo shoots and soon, her pictures were all over town.

“All these rich tycoons want to have a taste of this fine, beautiful African woman. These are big business men, tycoons…They’ll send you a message or they can send a pimp who’ll just text you. And I got those a lot when I became a socialite” she said.

SEE ALSO: This Dolapo Oni’s Note Will Remind You We All Have Our Struggles Despite What We Post On Social Media

Bridget didn’t set out to be a socialite but having worked so hard and then finds a man offering her $10, 000 just to look pretty and visit, she had to take the offer. Although, she lives the expensive life and vacations in expensive places, she wants young girls to know that there is “nothing for nothing.”

“You want a million bucks, you will do something that is worth a million bucks. It’s something I tried when I was in my desperate moment. I had to do it to just get back up. It’s not something any woman should be proud of doing” she said. To beautiful young women who want the glam life, Bridget says, “Nothing goes for nothing.”

But Jane, a student in Kenya, who will be turning 21 years in December isn’t bothered about what she has to give in order to live the glam life. In her chat with BBC Africa, she asks, “What is wrong about sex anyway? People just make it sound wrong but actually sometimes, it ain’t wrong at all,” she tells BBC Africa.

According to her, the socialites are an inspiration to her as they live the life they want. Jane comes from a humble background with parents who struggled to make sure she went to school. Although, her parents are religious people, Jane says she decided to choose her own path. Her mom tells her the only way to success is education but Jane thinks, one has to be beautiful with brains too.

25-year old Grace, who is a singer and a single mother of one, is also interested in getting a sponsor (someone who would lavish her with money and gifts) because of her daughter and her music. She doesn’t want her daughter to depend on a sponsor when she grows up, so she doesn’t mind what she has to do to get one.

“If I get someone who is willing to help me, if he’s asking me to sleep with him, I will” she tells BBC Africa.