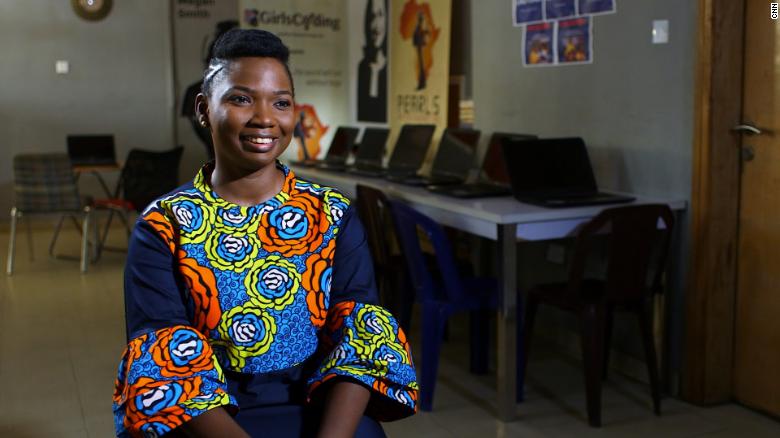 On the 13th of September, Abisoye Ajayi-Akinfolarin became the first Nigerian and the only African to be featured in this year’s CNN Hero– a television special created by CNN to honor individuals who make extraordinary contributions to humanitarian aid and make a difference in their communities.

She is the founder of Pearls Africa Foundation, a social enterprise that promotes the cause of vulnerable young girls through technology, entrepreneurship, skill acquisition and internship placements.

While Abisoye has achieved quite a lot in her career, getting there wasn’t a walk in the park, especially for someone whose mother died when she was just four years old. Growing up, she catered for herself as she quickly got used to being independent.

In a chat with Punch, Abisoye  speaks on life without a mother and the effect of it on her.

On how her mother died

I learnt she was sick. We are about ten children in my family from three mothers and one father. I have four older ones and all they told me was that she fell ill and died. I attended her burial.

SEE ALSO: “I Pray Not To Have Children Again In My Life. If Childbearing Is A Blessing, I Pray To God to Give It to Those Who Need It and Not To Me” – 29-Year Old Mother of 11 Children

On life without a mother

I would say that for me, it was normal because when you are born into something, it becomes a norm till you step out of your situation to see the way everybody is; then you realise that your upbringing was not normal. I would say that it was normal for a very long time until I was about 16 years old. It was at that point that I started living with foster parents and guardians and I noticed how they were relating to their children. It was at that moment that I realised what I was missing. At the same time, I really did not know what I was missing until I could see what I was comparing life with. For me, life was a struggle.

On the struggles she had to surmount as a result

When I was able to differentiate my left from right, I knew I had to fend for myself early in life. I grew up with an independent mentality which I still have. I may not have to describe it totally but I know that I do not wish for anyone to grow up without a mother. If I need to know about my mother, I would have to ask my older ones because I did not know her.

Having a mother means having a role model and if you do not have that, then I wish you the best. When I was trying to gain admission into the university, I did not have anyone to say, ‘come let us go.’ Unfortunately, the way our country is you have a limited slot for so many people so what is the hope of someone who does not have anyone to say, ‘come let us get you into school?’ That particular struggle was done by myself and I remember travelling from state to state seeking admission. I made all my required papers at once but I spent about four years seeking admission. If you have a mother who is alive, I am happy for you but if you do not, then the Lord is your strength.

SEE ALSO: 10 Naija Women Share One Important Thing About Being a Woman Their Daughters Should Know

On the effect of her background on her

Before I think about treating myself, I think of people that do not have food to eat. Before I buy anything for myself, I think of how many people that money can help. I am in a space whereby my conscience is at work with me. I cannot solve the world’s problem; neither can I change everybody from bad to good but at the same time, I know that I rarely cut myself that slack. There are many things I can buy with my money but I do not because I think of other people that have not eaten.