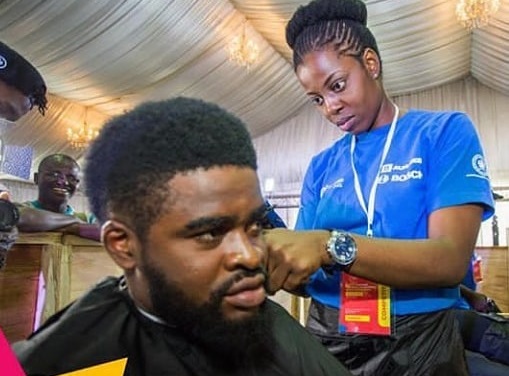 “I’m a chief, women don’t touch my hair” is one of the many excuses male customers gave  Onyinye Nneli when she was still learning the art of barbing.

A Maritime Management Technology graduate of the Federal University of Technology, Owerri, Imo state, Onyinye decided to learn a skill after she finished the National Youth Service Corps in 2009.

Although, she hadn’t seen a female barber at the time, she was encouraged by her brother in-law, Dr. Disu, to go for it. So, she began her apprenticeship at a salon in Ikotun area of Lagos state. After her apprenticeship, Onyinye started a white collar job but her encounter with someone with a bad haircut made her become a full time barber.

“I walked up to him and advised him about his hair and he asked me what I know about barbing. Then, I told him I’m a barber. So, he told me that someone would like to meet me being a female barber. He gave me the person’s card and I met with the person. We struck a deal until I decided to do it full time in 2016” she told Woman.Ng in a Whatsapp chat.

SEE ALSO: Yes, It Took Time And Effort But Her Hardwork Eventually Paid Off As Chika Ike Becomes The Latest Female Celebrity Author Of Book Titled “Boss Up”

Through the process of learning and becoming an expert, one of the challenges Onyinye encountered was rejection. From customers who outrightly told her No, to those who said it mildly, Onyinye had to work extra hard to prove she was up to the task, just like every woman in a male dominated industry.

Now an expert, she still sees the flicker of doubt pass through the faces of first time customers. But being familiar with that, she smiles in her heart, gets to work, and when she’s done, she leaves her customers shocked with admiration.

Encouraging women who want to go into male-dominated industries or any other but are scared, Onyinye said they will encounter challenges but it should be a motivating factor and not the reason to give up.

I learnt how to cut hair in Ikotun. The surprise look and rejections there, I could manage but the one I got in my first place of assignment in Ikeja was a first class degree rejection. Rejection that can drain one emotionally, psychologically and reduce one’s self-esteem to minus.

SEE ALSO: “I’ve Had Other Male Djs Treat Me Terribly Just Because I Am A Female” – DJ Lambo Speaks About Her Experiences In The Music Industry

The one that I can never forget in my life is:
Me:Good afternoon Sir, do you want to cut your hair?
Client: yes I want to cut my hair but, who will cut it for me
Me: Smiling, I will
Client: He laughed hysterically that he had to sit down, balance very well and laughed some more then he looked at me laughing, shaking his head, and said I will only allow you cut my hair when i’m 60years old.
Me: felt so bad but I don’t know how I spontaneously replied him and said, at that time I will be so busy and fully booked that my recent protegee will be the one to attend to you then I smiled I walked away.

The rejections I received is my driving force. I can’t afford to give up because all those rejections threw at my face will be a waste. Now I am proud to say, I have taught a few people how to cut hair.

Just want to encourage someone. What is that thing your heart is telling you to do? Go for it but I must warn you, it won’t be easy because it sounds weird and funny. People are going to laugh you to scorn at first but shake it off and use their laughter as your driving force to your success.

You can’t afford to give up. You can take a break to rest, meditate, strategize and continue but don’t ever stop because you have a lot of people to inspire with your success story. It will definitely end in praise, Las Las everything go dey alright. Be Intentional!!!