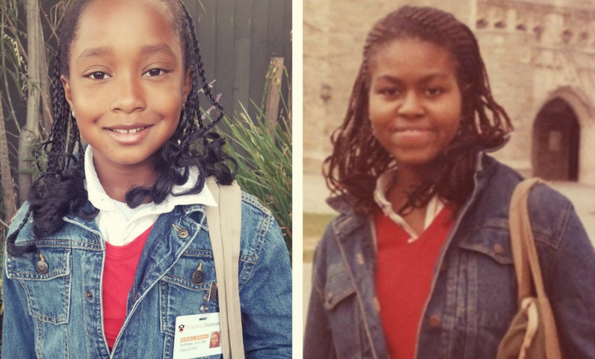 8-year-old Ella-Lorraine Brown, whose parents has always encouraged to look up to strong women as her role models, decided to dress up as Michelle Obama for her school’s Cultural Heroes Day and she nailed it!

Ella-Lorraine chose to dress up as Michelle Obama when she was a freshman at Princeton University.

Ella-Lorraine, whose mum is also a Princeton alumnus told MAKERS that she loved her daughter’s concept because her focus was on Michelle’s accomplishments as an individual, not just as an attachment.

According to her, Ella-Lorraine has never known a time when Black women weren’t publicly honored and ‘Black girl magic’ wasn’t a highly celebrated thing, so, they try to surround Ella-Lorraine with women who are go-getters like Michelle, women who are independent and smart, level-headed and loving.

“I loved it because by choosing to portray her hero as a college student, the focus was on Michelle’s accomplishments as an individual, not just as an attachment." This 8-year-old dressed up as her hero, @MichelleObama at @Princeton, & it's EVERYTHING. 🙌 https://t.co/gllJzec1MT

Ella-Lorraine’s parents make sure she knows about those who have gone before and have passed on, while encouraging her to use her voice like the women did.

For previous school projects, Ella-Lorraine has dressed up as pioneer pilot Bessie Coleman as well as Ruby Bridges, who was the first African-American child to desegregate an elementary school in the South.

Ella-Lorraine loves to dress up as her female heroes, like Bessie Coleman and Ruby Bridges. "She knows that folks came before her that allowed her to be where and who she is today and we’ve encouraged her to not back away from embracing that history.” pic.twitter.com/gVv1TauA8r