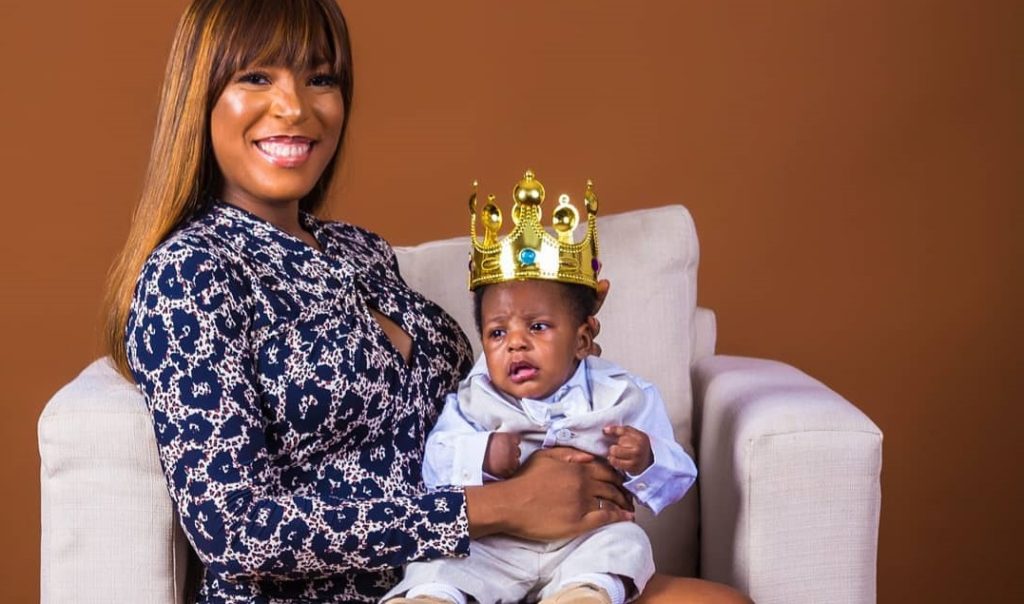 In May this year, popular blogger, Linda Ikeji shared the news of her pregnancy and while some people expressed their joy at the news, some criticized her for conceiving outside wedlock. In fact, she was reminded of her many statements about celibacy.

Following the birth of her son in September, there were controversies about the father of her baby and whether she actually got engaged, as announced by her sisters some months ago.

Two months later, Linda has told her own side of the story by revealing who the father of her child is, how they met and the current condition of their relationship.  According to her, she is sharing her personal life because of the young girls who look up to her.

She shared her story on her blog, with the title, “Meet my son Jayce…and yes, Sholaye Jeremi is his dad!”

Appealing to young girls who see her as a mentor, Linda says she does not regret having her son even though the way it happened may be wrong.

However, not many people accepts her explanation as they remind her of the many statements she made on issues like the one she presently finds herself in.

The funniest part of Linda Ikeji’s epistle is that she kept trying to prove that she’s a virtuous woman. Lmaoooo Nne please, I tifuru paynt meh the thing, chefu okwu nne! Inugo? You’re not the first

Linda Ikeji is a disgusting human. Talmabout I had just moved to Banana Island and he was living in a 3 bedroom flat. He and his 3 bedroom house have made you baby mama sis. Chop your L.

Linda Ikeji is really funny lol. Trying to explain away when no one asked her. Still bragging and being condescending at thesame time. Lol koshi

Linda ikeji is the typical self acclaim righteous and decent people….bring others down and pretend to be tthe good person while they do worse behind closed door.

She deserves all the dragging she’s getting! Fucking hypocrite.

so basically, all those dancing videos Linda Ikeji used to record in her car, were done on her way to 5th roundabout for her dick appointments? no wonder she always looked so happy 💀

Linda Ikeji is proof that the average Nigerian woman is only a feminist online. She still takes penisilin steady, even born join. Pursue baby daddy, but we all know there's a guy on the side that's still giving her penisilin. Making money off hypocricy.

So many loopholes in Linda Ikeji's story. The biggest trash is the part about God using Jeremi as a vessel for her biggest blessing. You were fornicating and still have mouth to mention God and blessings in a sentence. Wonders!

Cmon yall. Stop bashing Linda ikeji already. We’ve all gone back on something we said once before and yes that makes us hypocrites. Life is a long and unexpected journey and we’re humans and responsible for our decisions

It's funny how Linda Ikeji tries to write a long episode thinking it will just make everyone forget all she claimed she stood for. If other people do it then it's wrong but if you do it then there is an explanation.
Such bad thinking. pic.twitter.com/GYSqGc43nr

Naaaaa, there is a lot unsaid biko. Some things just don't add up.

But hey, great thing both parties have moved on…

Jayce has a loving mum…will hopefully have a relationship with his dad sometime in future.

Linda Ikeji said God sent Jayce's father into her life to bless her with Jayce
.
.
.
Nah Sis, you fornicated. Yes, that's what you did, FORICATED

You had secs when you weren't yet married, plis dont blame God. Dont accuse God of sending someone into your life to allow you to sin

I know Linda ikeji must have learnt her mistake through Karma the hard way but I beg y'all,all she needs now is good vibes no matter the hatred on her because ur comments might warrant to depression and remember jayce looks like the man she has a closed bittered chapter with. 🙏

She should have just narrated how the Jayce came about and ended the speech there. All the preaching she added at the end was not really needed😒

Dear Baby Mamas Association of Nigeria, you can now officially welcome Linda Ikeji into the fortunate group. 😂 😂
May we not be swallowed by our own words 🙏🙏 pic.twitter.com/4T08DnPao1

You become what you criticise!!!!
.
Linda Ikeji Criticised baby mamas, she became one..
.
Mourinho called Wenger specialist in failure, he is becoming one…
.
Now I will stop criticising Buhari…
And start criticising Dangote… pic.twitter.com/qk5ereq6K9