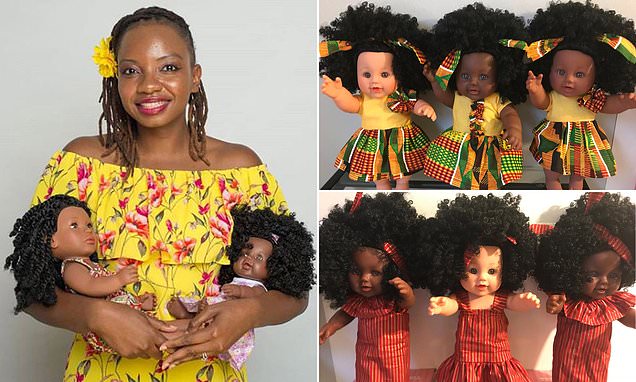 30-year old Widline Pyrame has created a line of dolls with Afro hair to empower little black girls to love how they look.

Growing up, Widline hated her tightly curled hair and wanted to have straight hairs like the one she sees in magazines and on dolls. So, she decided to straighten her hair by using her mother’s hair relaxing products but her hair fell off.

She was nine when the incident happened but it was etched in her memory.

“I struggled with my self-esteem and confidence as a child.I thought I wasn’t beautiful enough because of my dark skin and hair texture, which led me to want straight hair so badly”, she told Dailymail

However, everything changed when her uncle bought her and her sister a black doll to share. They were so shocked because they never knew a black doll existed.

While training to become a social worker, she became more exposed to the concept of self-love and decided to help young black girls to avoid the negative self-image she had as a child. So, she created her own range of black dolls with an Afro.

“When children are playing, they want to see something that represents themselves. I believe little girls seeing dolls that look just like them would help with the pressure of skin bleaching and the pressure to change their hair texture”, she said.

She takes inspiration from African and Haitian cultural designs, with each of the dolls wearing traditional dresses. Widline wants her customers and their children to feel represented, visible, comfortable and unique.