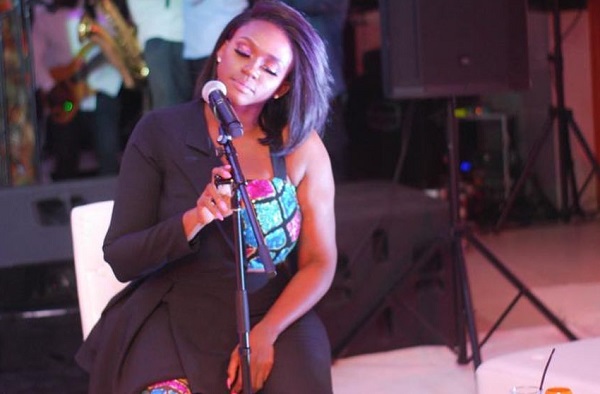 “Imagine a world where everything you ever dreamed of was at your finger tips. Well, that’s how I imagined music will be but…” –WAJE

Singer, Waje is sad and presently frustrated about her career and she is thinking of quitting music for a while to focus on other talents.

Last year, the singer released an album, Red Velvet, but according to her, it didn’t do well in the market.

“After everybody shouted ‘Waje, your last album was how many years ago, please we need an album,’ where are all the people that were shouting?” she asks.

Citing high cost of publicity and low purchase rates of her recent album, Waje says she is tired of pouring all she has into her music career and getting almost nothing in return.

“I don’t have the money for publicity and that’s what I am saying. Emerald’s (her daughter) school fees is there. It’s like I have ten things laid out for me and every single time, its always been my music, my music that is taking the bulk of my money. I am not willing to put money there anymore. I’m frustrated,” she told her friends in a video she posted online.

According to Waje, she wants to focus on other things rather than pour all she has into a career that yields almost nothing.

“I no longer believe that this thing is working. I am not giving up, I just don’t have faith in this thing anymore and its okay. I know that I am respected in this field and I don’t think anyone will call me a failure. The point is that I don’t want to do this anymore. I am tired. Do you know how much I have invested into this career thing?

You know when you start something and its very exciting, I’ve lost excitement. I’m not saying I don’t love making music. Everytime you find me in the studio, that’s my space on stage, I love it but why do I have to go through the things I go through as a musician because of my love for it. at what point am I going to get to that place of gratification and satisfaction. I don’t want to be in the class of artistes that have failed. I don’t want to be in that class. I just know that I’ve come to the point where I don’t think its working for me anymore.

While her fans understand her reasons and empathises with her, they urge her to keep fighting and not give up

It's sad hearing that #waje is facing tough times in the music industry because i know she's a powerful singer with an enviable vocal ability. I think she only needs to study what works here,what trends &mayb a collabo with one of these reigning artists culd do it for her again

I really do not think Waje's statement is about pity. She's only speaking her reality. She invested so much in her business but it is not yielding the results she expected.
The only way she can get returns is if we patronize her…

What Big sis @OfficialWaje talked about in her video posted on Instagram is what most creative and talented people in go through and it is very discouraging for young artist like us. #Waje

Ignorance is bliss. Knowledge is power. Artistes have been dropping albums in Nigeria for time now and even without a proper marketing budget or structure and they've been passed on, not slept on and forgotten but #Waje an indie artist in an honest moment is considered weakness?

Waje is just like every other Rich Nigerian who isn't ready to invest her time and money into a particular business, but would rather put her EARNINGS on more important things like her daughter! we already making it look like she's suffering! No #Waje isn't suffering

Please help me Loud it.. Pushing yourself in the Nigerian entertainment industry involves cash.. And when the said hustle isn't paying why put more into it? How can they say #waje is Lazy? Am tired of Nigerians

All Waje is saying is; after all d money spent on her music, profit gained was being famous, she’s channeling all dat money into sometin else. Typical strong woman. It’s not easy being a single mother. #waje will come out strong las las 💯