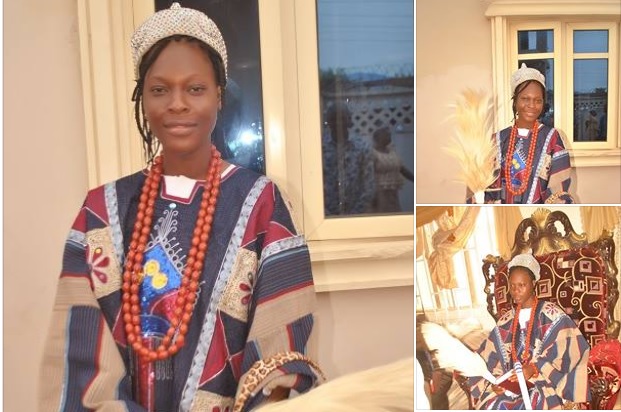 A regent is a person appointed to rule a kingdom because the monarch is minor, absent or incapacitated. In some Yoruba towns, a regent is usually the first daughter of a recently dismissed king. She ascends the throne for a period of time until the definitive decision of the kingmakers on the appointment of a king.

When Moyinoluwa Falowo was called be a regent of her hometown after her father, who was a king died, she refused because she felt that, as a christian, she would be defiling herself. However, after praying about the matter and sought godly counsel, she finally agreed to take on the responsibility of a regent.

But the amazing thing is that, Moyinoluwa is already declaring her community for God as her installation was done with prayers!

After my father passed on to glory.
A call came for the throne to be occupied by a Regent.
To lead my community till a new king is chosen
A call I had foreseen for some years
And have vehemently rejected
Like Peter, I believed such position was a meat ‘unclean’
And should not be eaten by me.

I struggled
It was a war
I have plans
I feared how long the tenure may last
The idolatry associated with it
How it’s going to change my lifestyle
Give me huge responsibilities
And also require some sacrifices.

I prayed strongly against it.
Asking the good Lord to deliver me and frustrate the plans of the ‘enemy’ for my life.
But a certain friend told me ‘Not so’
‘Moyin, pray that God’s will be done on this matter’
A mentor said
‘Moyinoluwa, if it is the will of the Lord, it’ll stand’
With tears, I changed my prayer point.
God let your will alone prevail in this matter..

I gave it to the Lord
I asked Him to help me if it is His will
If it is going to hurt me, let him deliver me.
He answered!
He gave me a go ahead
Blessed me with His peace
Reveled to me His purpose in the matter.
And gave instructions.

The installation was done with prayers.
And proclamation was made to the ancient powers of the land that power has changed hands.
Ancient gates lifted up their head
Everlasting doors were declared opened
For the KING of Glory to come in
The foundation of the land shook and war was declared on darkness.

Lord Jesus, the throne of Ibulesoro belong to you.
You’re the rightful owner
I’m just a caretaker
Come and reign
Bless your people with peace and prosperity
Let the gospel receive breakthrough
And let destinies be preserved.
I’m not going to worry about my life, because I know you’ll take care of my affairs.
I have not sent myself, you ordained me.
Help me to stand my ground
And come out of this, better and fulfilled.

I’m using this medium to announce that I was installed as the regent of Ibulesoro (Ifedore LGA, Ondo State) on Thursday, April 11. It is a assignment I have received from God for a season. I request for your prayers and support.

My gratitude goes to my family, friends and all men and women of God that took their time to wait on God with me and support me before, during and after my installation. You’ll not lose your reward.